What compels someone to pick a book off a shelf that’s full of choices? Or to click on a book in a seemingly infinite online store?

It’s the book cover. The cover that’s the most eye-catching will get the most interest. Keep reading on to learn how testing will help your book cover stand out from the pack.

Let yourself be wrong

When a colleague suggested he re-design his book cover, author Temple Emmet Williams reacted as many of us might: “What the hell’s wrong with my cover?” he asked.

There was nothing wrong with his cover, and he intended to prove it. He designed some new covers and then, to make his point, took his least favorite design and tested it against the original cover. 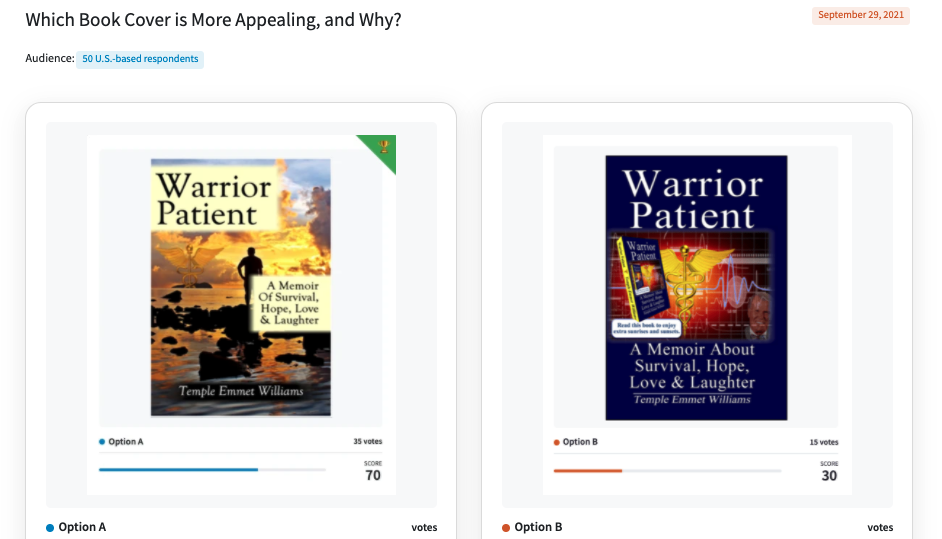 His least favorite cover was overwhelmingly favored in the poll. It wasn’t even close: 70% chose the alternate cover over the existing one.

But Temple was still skeptical. He had two cover designs left. One featured a man facing the sunset. The other showed medical staff, including a woman whose eyes were so piercing that her cover was Temple’s preference.

The author loved the Doctors. Readers were creeped out.

Much to his shock, the photo of the medical staff was off-putting, and those piercing eyes didn’t help. While the results were closer, two-thirds of respondents still preferred the sunset. 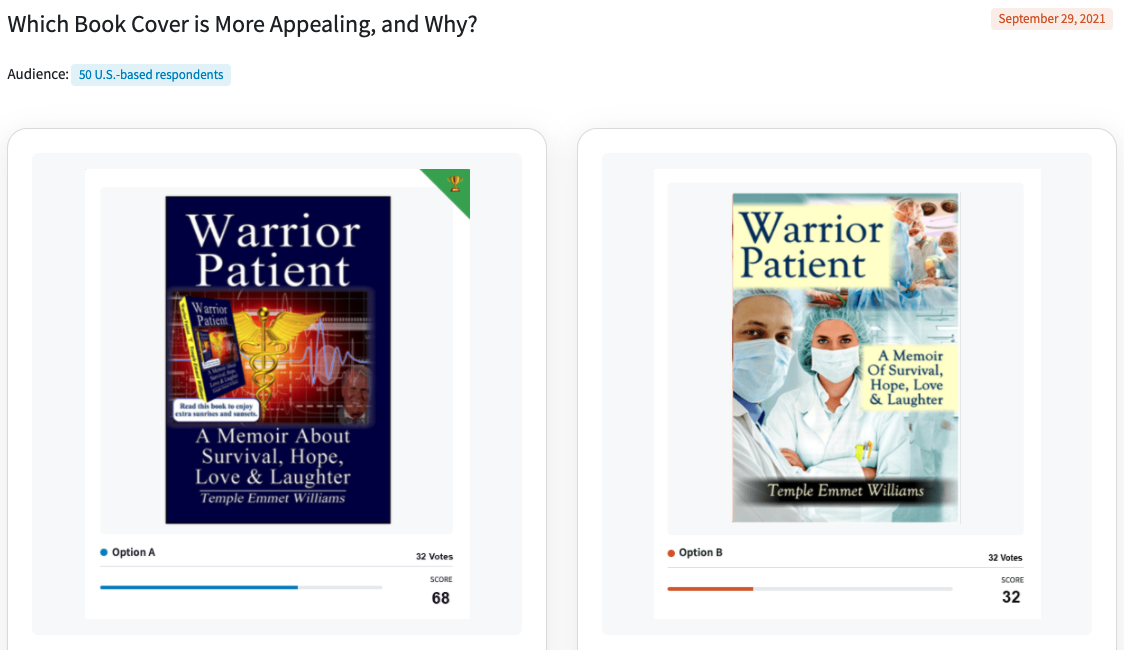 Some typical responses in favor of the sunset made Temple aware of something he hadn’t even considered: doctors can seem scary, especially behind masks. Here’s a sampling of the comments:

With two clear winners from his two polls, Temple tested them against each other, with double the sample size. He was sure this final matchup would be close. It wasn’t. 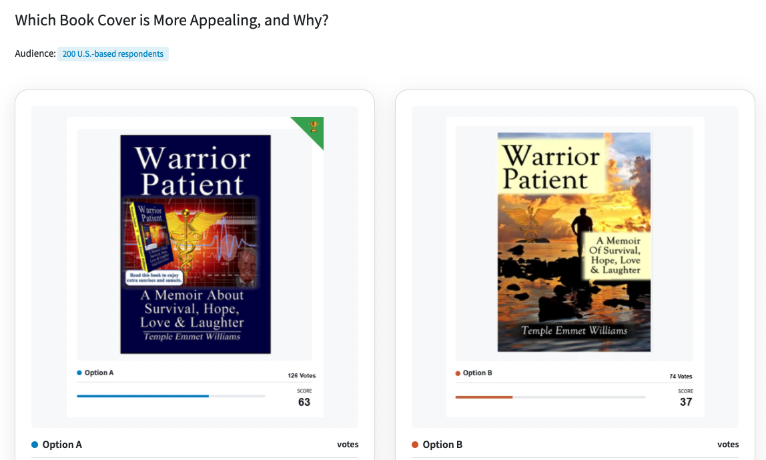 63% of respondents preferred the purple version over the yellow. They found it warmer and more inviting and remarked on its readability. They also associated the color scheme with hope, vibrancy, and inspiration. Temple said, “All of the information people volunteer when they make their choices, the words they use and emotions they reveal, become a goldmine for improvement.”

Feeling confident in the appeal of the purple cover, Temple re-released his book. “I believe that change has a direct connection to the book receiving a B.R.A.G Medallion, and also a Gold Medal in the Reader’s Favorite Book Awards,” he said.

Your book title is distinct from your cover design, and creating the two should be a separate process. Each has different considerations and will be judged using specific criteria. Testing more than one thing at a time is problematic because it skews your results.

When you’re testing book covers, make sure that each design option includes the same information. If you tested two cover designs and each cover had a different title, for example, you wouldn’t know whether respondents preferred the design layout or the title on that design layout. 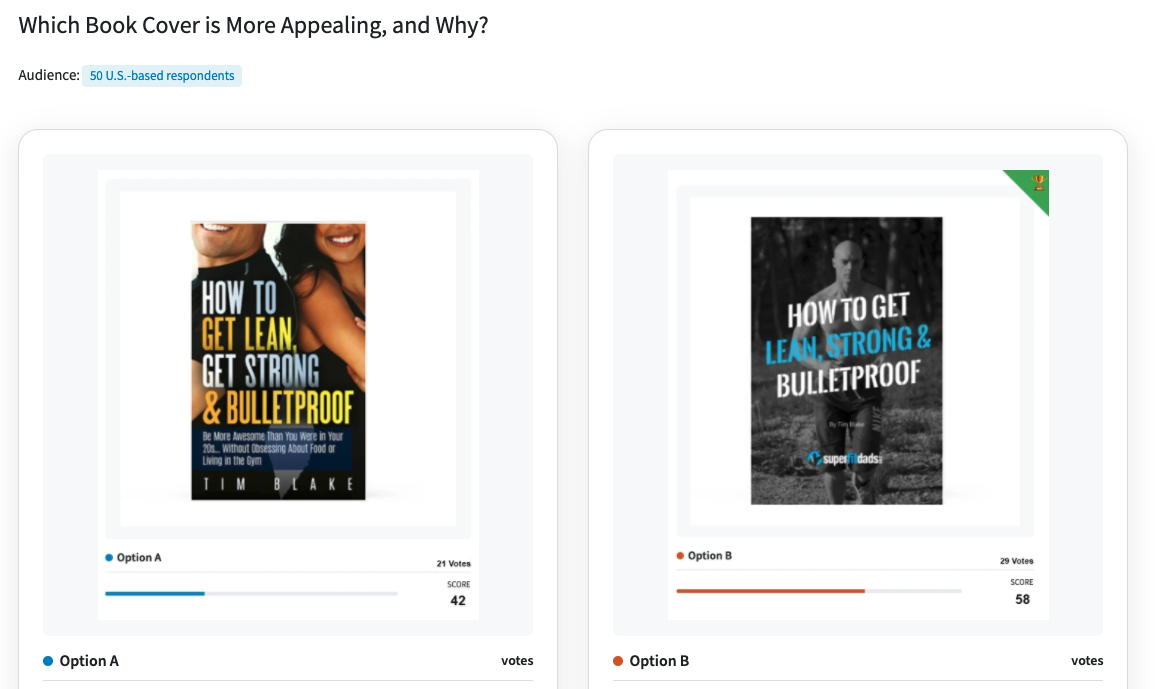 This poll would be less biased if each cover included the same title, subtitle, and author attribution. Then, the only test parameter would have been the cover design.

Here’s a better example. This author is testing two cover designs. The title, subtitle, author attribution, and even graphic layout are the same. The only difference is the “Action Plan” stamp. By only testing one thing at one time, this author knows the symbol helps his cover. 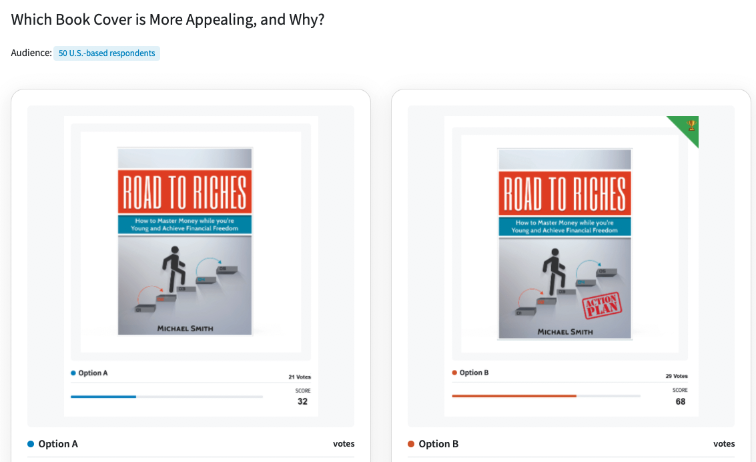 Here are some more helpful articles from our library:

Did this answer your questi